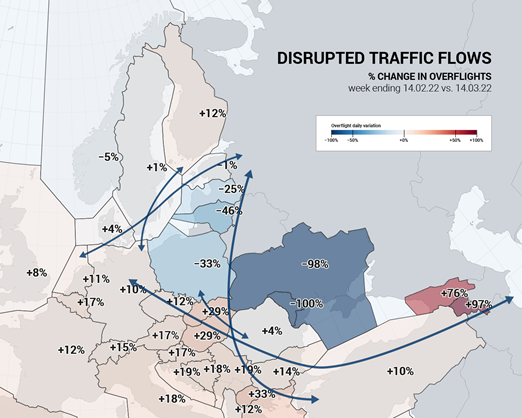 The war in the Ukraine and recovery from the COVID pandemic has seen a surge of over 20% in over-flight numbers handled by FAB CE states in a single month, according to the latest Eurocontrol traffic statistics for February 14 – March 14.

“The unprovoked invasion of Ukraine has brought commercial flying there to a standstill and stopped overflights of neighbouring Moldova. Elsewhere around the borders of Ukraine, Russia and Belarus, overflights are also much disrupted,” according to the Agency. “Hungary’s 29% increase in overflights (290 per day) owes much to the re-routing of flows to Asia and the Middle East further South, but that accounts for about a third of the change (100 flights per day). Flights to and from Romania have grown significantly in the last month, adding about 70 flights per day for Hungary; this is mostly ‘organic’ end-to-end growth rather than re-routing. Other, smaller overflight gains for Hungary include the Turkey-Russia flow mentioned earlier, plus other Scandinavian and Baltic flows that are now avoiding Ukraine.”

“These are strong upsurges in demand for en-route air traffic management services in our region,” said Matej Eljon, FAB CE Programme Manager and Director of FAB CE Aviation Ltd, “and underline the volatility of the recovery (See also: https://www.fab-ce.eu/news-media/news/274-air-traffic-recovery-in-fab-ce-states-continuing-but-complex-latest-eight-week-forecast”). “We are working with our neighbours and the Network Manager to ensure we can accommodate this sudden surge in demand with the minimum of delay and disruption.”

While traffic increased throughout the FAB CE region during this four-week period there were marked differences in the level of increases among neighbouring States, ranging from 29% in Slovakia and Hungary to 12% in the Czech Republic.