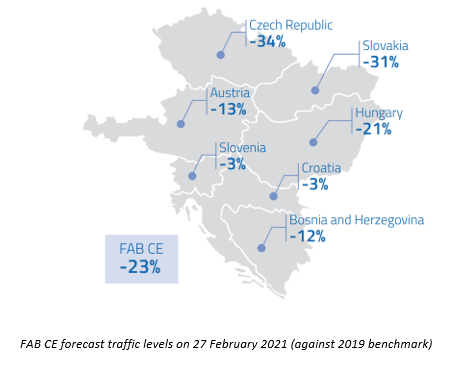 Air traffic in FAB CE States is continuing its slow but steady recovery from the COVID-19 pandemic, according to the latest forecasts from air navigation service providers of the FAB CE airspace alliance and the Network Manager.

In the first two months of 2022 overall traffic is forecast to recover to around 75% of 2019 pre-pandemic levels, though with wide variations between States.

“This is still a two-speed recovery for FAB CE States,” said Matej Eljon, FAB CE Programme Manager and Director of FAB CE Aviation Ltd. “In Croatia and Slovenia traffic recovery is on course to shortly reach, or in the case of Croatia possibly exceed, 2019 air transport movement numbers. But in the Czech Republic and Slovakia the recovery is moving more slowly and both States are likely to see flight numbers at levels 30% lower than 2019 figures at the end of the first eight weeks of 2022.”

The complex nature of the recovery becomes clear when overflight movements are compared to airport movements. While Croatia’s Zagreb International is planning to

handle traffic loads just 1.58 per cent lower than 2019 in week eight of the year – in line with the above-average recovery rate shown in the high-level figures – Slovenia’s Ljubljana is predicted to manage just half the movements it handled in 2019 during week eight.

The overall figures are in line with the recovery in other parts of the continent, according to Eurocontrol. During the first 12 days of January 2022 network traffic was at 75% of 2019 levels for the same period.

But the Agency also recorded the uneven nature of air transport demand, with charter (up 35%), cargo (up 3%) and business aviation (up 9%) all recording stronger figures than 2019 while legacy carriers are operating at 33% of 2019 traffic and low-cost carriers are flying 34% fewer flights than two years, as demand has been impacted by outbreak of the Omnicron variant.