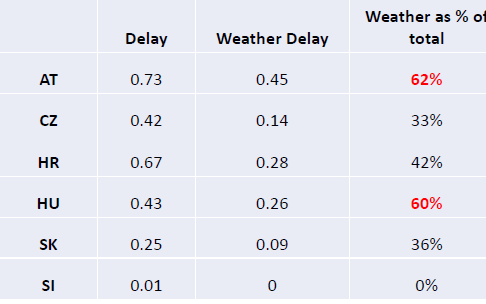 “Some of these growth rates are more than double the upper traffic forecasts of STATFOR and are unprecedented,” said Matej Eljon, FAB CE Programme Manager and director of FAB CE Aviation Ltd. “It has required significant efforts to cope with this unpredictable traffic and not to cause disruption to the entire network.”

But higher than forecast growth rates were not the only reason for the increase in ATFM delays.

“While the delay situation for Karlsruhe ACC has improved, these measures led to an increase in delays for Vienna and Prague ACC which has been reflected in the overall FAB CE performance,” said Matej Eljon. ”Network Manager analyses suggest that no major capacity improvements should be expected in Karlsruhe in the next year or two.”

A third factor has also played a major role in the worsening delay situation – increasingly volatile weather, which is now responsible for 51% of delays in FAB CE. In Austria, for example, weather delays have more than quadrupled over the past few years but other FAB CE States have also significant increases in weather related delays over the last year or so (see table below).